The work of Fernando Sanchez Castillo is grounded in an exploration of history and the various manifestations of order and chaos in society. More specifically, the artist is known for numerous pieces in which he specifically addresses the complicated relationship the Spanish people maintain with the years of Franco’s dictatorship. Part of a generation characterized by idealist scepticism and post-heroic aesthetics, Sanchez Castillo is interested in finding a viable place for the notions of utopia and revolution within the social and artistic community of today.

Produced in 1999 at Valle de los Caídos —an emblematic site of Franco’s regime— the installation traces an action that took place onsite, with the infamous monument as a background. It consists of a large stone made of light material, used during a performance wherein two men engage in a playful confrontation, as if to incarnate the conflict that continues to exist between those who believe the true victims of the war were the republicans, while others believe that those who fell fighting against them must be considered as martyrs for the good cause. 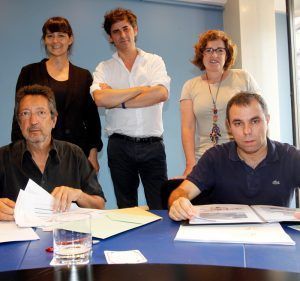 His creative process is a reflection of her curiosity, meaning that in her works an air of re-balancing or elucidating on different readings of facts or truths established through different perspectives and methodologies of work can be felt. She reviews history critically, both distant and recent, whilst at the same time she examines the role of art in its representation and how are gaze affects its configuration.