This work is part of the series of hanging figures Juan Muñoz started producing in 1997. Hanging from the ceiling, these works float in space, unlike most sculptures, which are usually presented on pedestals. Rather than looking down, the visitor needs to raise his gaze towards the ceiling, in a way that restores the notion of verticality. These series also evoke bodies executed in the cycle The Disasters of War (1810–1820) by Francisco Goya (1746–1828). One can also relate the pose to the one of the female acrobat hanging in the air from a cord she holds between her teeth, as depicted in Edgar Degas’s painting Miss La La at the Cirque Fernando (1879). The scene is depicted with a bold perspective from below and displays the French artist’s research into representations of the body in movement, something quite similar to the feeling one gets from looking up at this work.

Considered as a benchmark in the renewal of contemporary sculpture. He forms part of the first generation of artists who reintroduced figuration into the art scene, and has also an extraordinary ability to devise narrations in atmospheres loaded with theatrical verve. In his work there is major tension between the unreal spaces and the tangible, with references to the world of magic, illusion and mystery. 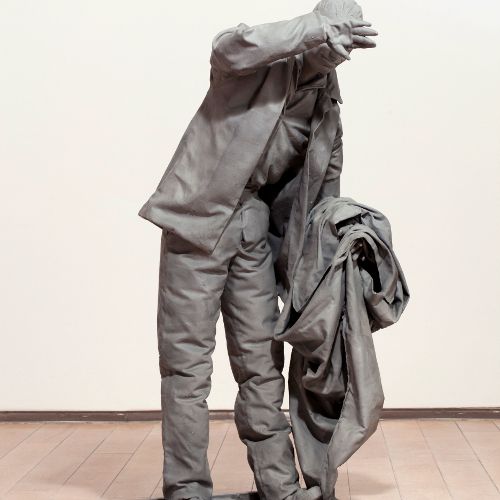