From November 19, Centro Botín welcomes the public to a new iteration of Itinerarios, the annual exhibition that showcases the work of the eight artists selected in the last call for Fundación’s Botín Art Grants. These grants are characterized by their openness and flexibility, as the conditions for participation do not stipulate age, nationality or specific topics, thus generating a broad and extremely necessary space of exchange, experimentation and reflection.

Since 1993, Fundación Botín has awarded the Art Grants to support Spanish and international artists in the research and production of new projects, serving as a catalyst for contemporary art, and as such is a unique platform for making known the latest developments in contemporary creation in a prestigious institutional context.

Itinerarios XXVII is the culmination of this grant, reflecting a broad range of interests and artistic practices. Each project displayed should be viewed as a work in itself, as a unique invitation to engage with the

languages, spaces and networks that each artist has been weaving over the past two years. However, they are united by the context in which we are all living: their processes are permeable to the ongoing economic, ecological and social crises, yet are also defined by the creation of new alliances and places of encounter to collectively imagine other possible formats.

As it is common in these awards, several of the proposals included travelling to conduct research in other settings, get involved with different communities, experiment with new materials or study abroad. Inevitably, their projects were directly affected by the health crisis that began just months after they were selected and by its global consequences, forcing them to reconsider their processes, materials and work spaces. In the words of María Inés Rodríguez, the author of the essay that introduces the catalogue, ‘Far from solely bearing witness or vociferously uttering a collective complaint, these Itinerarios bear an invitation to resistance, a manifestation of the importance of building a coherent language in line with the challenges of our time in an articulated, intersectional and yet flexible way’.

Itinerarios XXVII will remain open to the public until April 16, 2023 on the first floor of Botín Center, a time during which the visitor will be able to connect with the most recent contemporary art practices.

Over the past eight years, borragán (sic) has developed the project Litofagos (Lithophages) on stone ingestion in different cultures. The project developed within the grant program focuses on salt ingestion, cultivation and rituals. This mineral is the most common and active of the geophagies (the practice of eating soil) and the stone ingested the most by human beings.

The film Halito (29:28 min) is the outcome of the collective process undertaken by the artist and the communities of Chijllapata, Tahua and Jaruma in the Bolivian Highlands— the highest-altitude dry sea in the world—with whom borragán lived. Dingua is a collaborative piece with Alfonso Borragán and Javier Noriega. It consists on salt stones from Uyuni (Bolivia) that has been hollowed out by the licks of Cantabrian cattle, as they need this mineral supplement in higher altitude landscapes. This stone activates the reaction of the silver nitrate from Potosí, which is catalyzed via ultraviolet light and moisture.

“Through different collaborations, this project seeks to reconstruct the boundaries between subjects and things, between biological and non-biological matter. Salt is the breath of our life on Earth.” (alfonso borragán)

The film starts at 10:15 a.m. and is played recurrently at quarter past and quarter to. Last session starts at 7:15 p.m.

Armando Andrade Tudela’s investigation focuses on the complex correlations between pedagogy, vanguard, dogma and militancy in Peru’s recent history. The film developed as part of the grant, La verdad ha cambiado (The truth has changed, a loop lasting 15:37 min) continues to explore these correlations by concentrating on the Fine Arts Faculty at the Pontificia Universidad Católica del Perú, where the artist was an art student in the 1990s. The installation includes three textiles from the Honda Murria series (2022) in which the artist uses images of locks, hinges and necks to continue exploring the body’s place when facing structures.

“For those of us who were students in that Faculty, this period weakened any political-social consciousness. The film is created from a series of photomontages where I interspersed photographs from the Fine Arts Faculty’s archive with images showing different forms of submission and psychological abuse. Based on this visual script, four actors perform roles of domination and subjugation, rupture and establishment, by mutual agreement.” (Armando Andrade Tudela)

LA INFLUYENTE, an expanded performance for screens and bodies (2019 – in process), is a research and artistic project whose point of departure are the first-class relics of Saint Teresa of Ávila. The vitrines act like an antechamber, containing working documents, photographs, vestiges of the performance and elements related to the artist’s investigation, which reveal the backstory of the project. The video polyptych (a loop lasting 14:31 min) presents the performance inspired by the relics of the body, the life experiences and the interpretation of the texts of Teresa of Ávila, featuring Candela Capitán as T€R€$A.

“The objective of the project is to analyze the influence that a body can have—either the body of a saint or a contemporary body—by means of pre-modern and technological mediation devices, as well as their ability to assemble communities of faith or communities of users. Aren’t the screens of our smartphones the reliquaries of the twentyfirst century?” (Joan Morey)

Elvira usually undertakes long-term social historical research projects. “Los primeros fríos (The First Cold)” is a project around the sculpture by Miquel Blay i Fàbregas (Olot), whose original is housed in the MNAC (National Art Museum of Catalonia), while its copy, by the same sculptor, is located in the Carlos Thays Botanical Garden in Buenos Aires.

This sculpture witnessed to the demonstration held on 1 May 1909 in the former Plaza Lorea, where dozens of workers were murdered by police repression, which unleashed Semana Roja (“Red Week”) in Buenos Aires. During that demonstration, the sculptural group was hit by six bullets, four on the man’s back and two on the girl’s back.

“The drawings exhibited were made using two techniques: dots and lines in ink, which enabled me to draw something that resembled the web or grain of the photographic documents in an effort to rewrite or engrave these images on paper and thus unfold this drawn essay book. The vitrines contain a series of historical documents, a bibliography and drawings, creating a constellation in relation to the sculptural group Los primeros fríos.” (Gonzalo Elvira)

Assaf Gruber’s work is a result of his ongoing investigation on how politics intersect with art and its institutions. It reveals the human stories and shifting ideological values at the “backend” of cultural institutions. The main ‘protagonist’ of Gruber´s research for the grant is the Avant-Garde art collection of Egidio Marzona, which comprises nearly 1.5 million items, including some of the most canonic artworks of the 20th century by artists such as Man Ray, Marcel Duchamp and El Lissitzky. The collection was donated to the Staatliche Kunstsammlungen Dresden (SKD) museum complex. This institution houses the first museum open to the public at large in Europe in the eighteenth century: The Green Vault.

Bringing together Baroque and Avant-Garde traditions, the sculpture Präsens combines rare red corals, a now endangered species which features prominently in the Green Vault’s collection, with painted wood shaped into the form of the Soviet sickle, a symbol used in many early 20th-century avant-garde artworks. The series Movement takes photographs from the aforementioned collection, now named AdA(Avant Garde Archive), depicting West German protests held in solidarity with East German values, and combines them with corals.

“This project enables me to connect and shift the center of attention between the two types of authorless works which the SKD brings together today: the sculptures by unnamed artisans and the images taken by anonymous photographers”. (Assaf Gruber)

The collaborative project Estudio Flotante, cuando el río suena a Amazonas (Floating Studio, When the River Sounds Like the Amazon, 2019–2022) is inspired by the relationship between human beings and water in the most important freshwater reserve on the planet: the Amazon River.

This gallery presents two sound works along with the project’s documentation collected in three books. Gota a gota el agua se agota (Drop by Drop Water is Drained, 17:28 min) was recorded on the artist’s journey to Peru’s Amazonia and includes fragments from the investigation and collective sound experiments. Due to the interruption of this journey by the outbreak of the pandemic in 2020, the project continued in the Guadalquivir River. The second sound piece Amazonas, entre realidad y ficción (Amazon, between Reality and Fiction, 11:25 min) is based on La Gioconda, an opera that opened at the Teatro Amazonas in Manaus in 1897. The lyrics were rewritten by the artist to bring them into the present.

“This river experiences constant tensions because of capitalist and colonial extraction, which endanger its potential to generate life. Estudio Flotante follows a ‘collective artistic expedition’ as a method of situated creation along the river course, using shared experience to address different relationships between bodies of water, be them human or riverine”. (Seila Fernández Arconada)

Bayón’s process revolves around the quest for new materials for her sculptural works through the exploration and revival of everyday practices of conservation and preservation. The work she undertook during the grant is based on manual production, progressively incorporating certain industrial processes, while she explores gradual transformation processes in which materials are “macerated”. The artist experiments with the vegetal pulp from cotton garments, which she decants and then solidifies, incorporating other materials and iterations in the space.

“These sculptural constellations are the outcome of a process of insistence and replica of formal gestures to open up the possibilities of a pattern. This pattern (of clothing, of behaviour) has been reshaped bearing in mind the transitions between the flat and the volumetric, or the reciprocal inclination occurring between two bodies about to meet each other.” (Lucía Bayón)

Ana Santos’s work is the outcome of a free, personal interpretation of the production of objects and how they are related to space. While developing the project for the grant, Santos experimented with new materials and techniques, stressing the predominance of color and the surface treatment of the sculptures.

In these sculptures, the artist juxtaposes tubular stainless steel and high-density PVC pieces with lightweight materials and objects, allowing noncongenital colors of certain objects to permeate the reflective surfaces, like fiberglass, metal and polyester thread. The pieces are extremely architecturally precise and notably vertical, like columns drawn in space which invite us to walk around them.

“His eyes are made of semiprecious stones; copper filaments draw the eyelashes. The figure shimmers.” (Ana Santos) 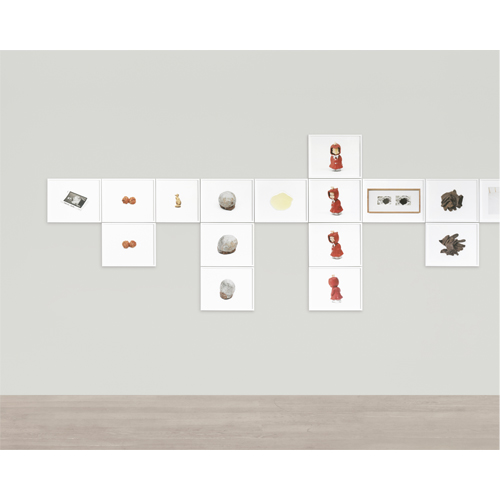 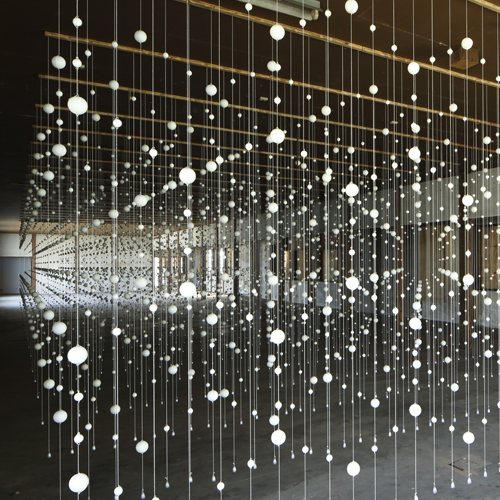 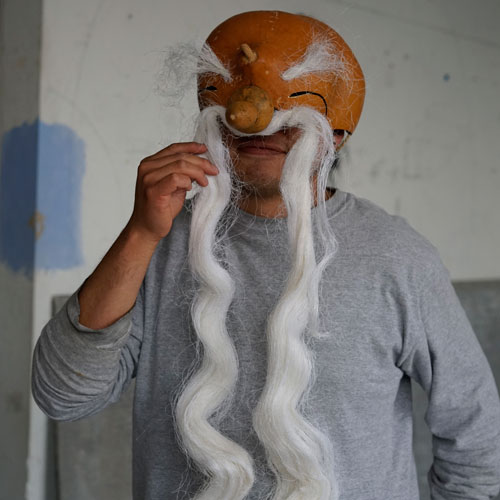 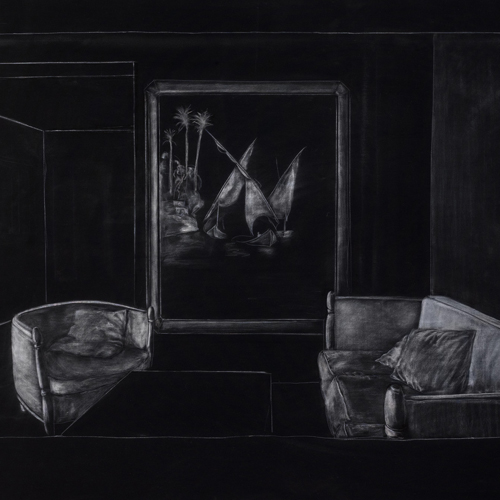